A typical headhunter scene in Borneo

A mere 1hr, 45 min. flight from Kuala Lumpur and we’re in Kuching, the capital of Sarawak on Borneo (third largest island in the World). Kuching is a rather strange city, very different to anywhere else in Malaysia. It’s elegant, quiet and clean and not a lot goes on but it does have a fascinating past.

We’re staying at the Pullman. It’s very central and has great views from the top floors.

The name “Kuching” apparently derives from the Malay word “Kucing” meaning “Cat”. The local tourist board has taken advantage of this and there is a very weird cat museum 🙂 and some pretty strange cat statues. 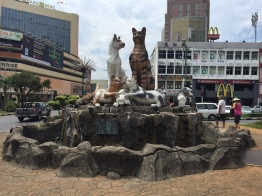 The food is once again awesome.  The great thing with being here for a long time is we get to try a wide variety of places.

Food court on top of a garage

The last restaurant, James Brooke, is named after an English man, the first White Rajah and founder of Sarawak (the family ruled for 3 generations).   Here’s a great account of their very colourful lives. I’m finding the history here very interesting.  My father was stationed in Malaya (as it was then called) and I was born here.  In 1963 the  British colonies of Sarawak, Sabah and Singapore joined the Federation of Malaya and Malaysia was born. Singapore left (was expelled) 2 years later and celebrates 50 years of independence this year.

The markets are really interesting. The Kubah Ria weekend market where the locals come down the river to sell their various wares.

Even the headhunters attend

Some are particularly proud of their produce:

Fishermen and their lobster 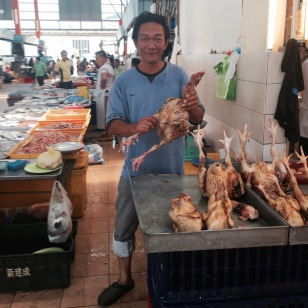 Chicken man and his chicken

The Indian market – amazing smells (not all pleasant):

A bit of everything

There is a very large Chinese population here and wandering around China town anywhere is always a great experience: 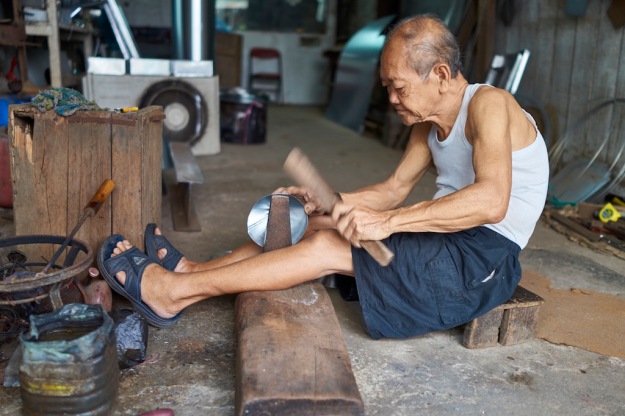 Life in Kuching revolves around the Sarawak River and fishing is a major industry:

fishing boat returning in the early hours of the morning

We discovered that there is an Indonesian Consulate in Kuching. After a quick phone call and visit, we got our next two month visa for this wonderful country.  The quickest and easiest visa we have ever received (and half the price we paid in Holland). So, after visiting Sabah (North-East Borneo), we’ll return to Bali  for September and October (the best weather in South-East Asia for this time of the year). Next post from Sabah.

6 thoughts on “A Month in Kuching, Borneo”