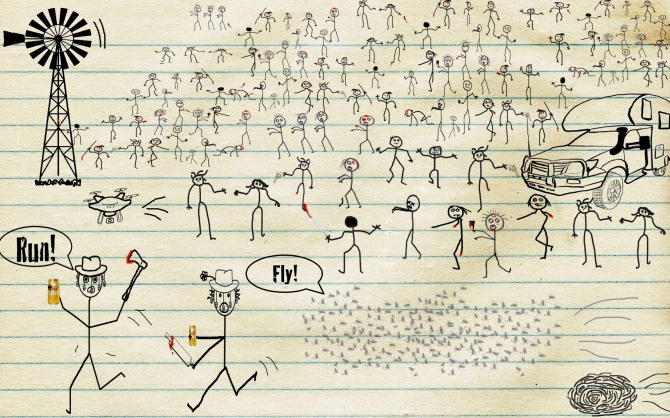 Not a good idea to watch “The Walking Dead” whilst in the Outback on a deserted campsite!

After 6 months in Asia, the final month spent on Bali staying at the rather swish Maya Hotel , we flew to Brisbane.  For the first time we used Virgin Australia and what a wonderful flight experience that was!  We stayed for two chilly, rainy days, made worse by the fact that we had no weather appropriate clothing with us (we’d left all our cold weather gear in the camper on departing Australia for S/E Asia).

As soon as we left Brisbane, the sun appeared and the temperatures soared. A short drive and we were reunited with our camper. He’d been very well looked after and in no time we were on our first campsite in Clontarf.  We decided to stay a while not only to get reacquainted with camping life but also because Clontarf is a lovely location on the sea with miles of coastal paths ideal for walking and running. 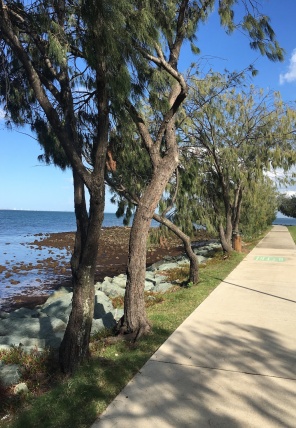 Heading North we spent 2 nights just outside Gympie at Ross Creek Store, a  free rest stop which we had all to ourselves so a great opportunity for Dave to practise with the drone we’d bought in Brisbane. We managed not to crash or lose it and got some great shots of our camper and us from above.

Our second stint in Australia was turning out way better than the first trip and this was all down to the fact that flies were practically non-existent! We were able to sit outside and actually enjoy our surroundings.  Because of this we decided to give the Outback another chance and head out west as far as Cloncurry.

Our next stop was Maryborough, home to P.L.Travers, the author of : 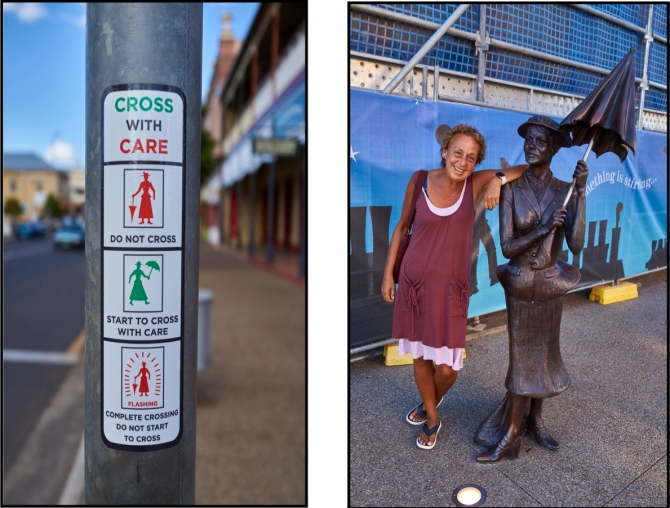 A really nice town with loads of beautiful old buildings: After a several days and a few more stops we came to Lake Maraboon: 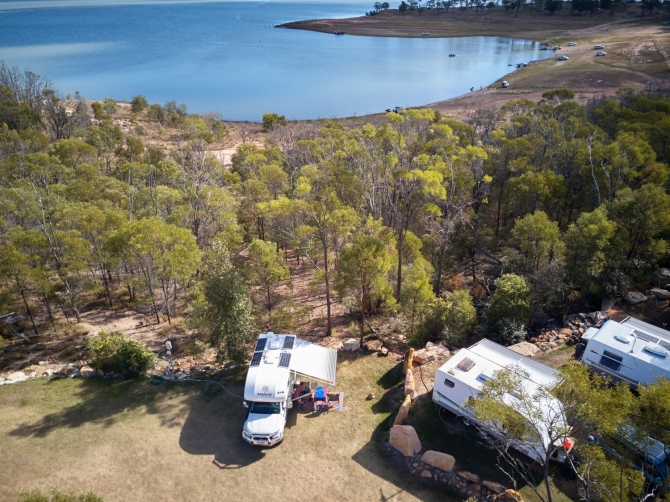 Apart from the scenery, the highlight here was the birdlife.  We saw my favourites, kookaburras, up close for the first time and they were so unafraid we could hand feed them.  The rainbow lorikeets are super cute but big bullies and, as often as I see them, wild cockatoos are always an amazing sight.

Heading ever further into the Outback, stopping places became sparser and we had to make sure we were always stocked up: 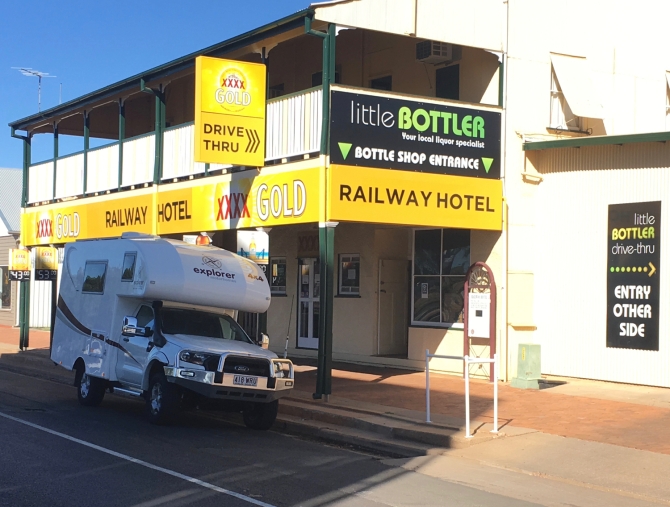 On the drive between Ilfracombe and Wilton we stopped off at the very fun Qantas museum.  Really interesting to learn about the history of one of the World’s oldest airlines (founded in 1920).

And we complain about the seats today!

How times have changed

We were now into dinosaur country and looking at the scenery around us, it wasn’t difficult to imagine T. Rex and co. wandering the land. 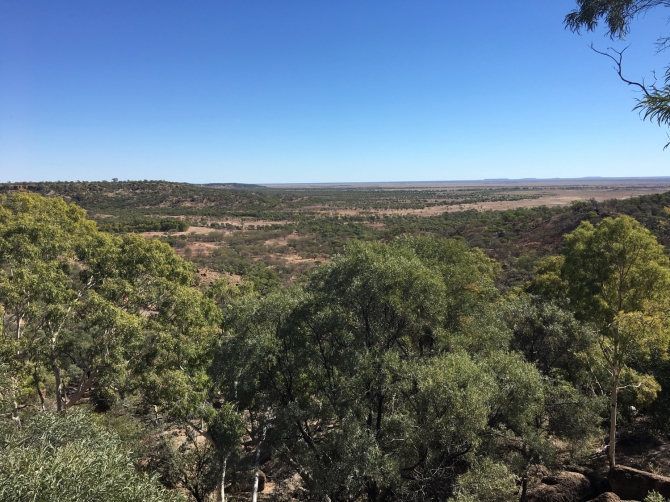 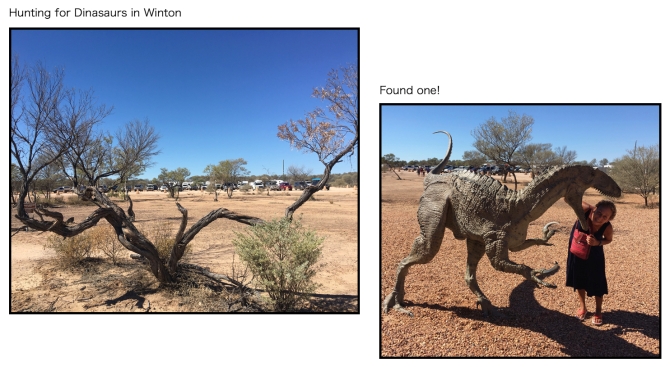 The roads we followed through the Outback were, on the whole pretty good: Mostly tarmac, though occasionally getting very narrow making for hairy situations with oncoming vehicles  (especially road trains).  Fortunately, there’s not a lot of traffic to worry about: 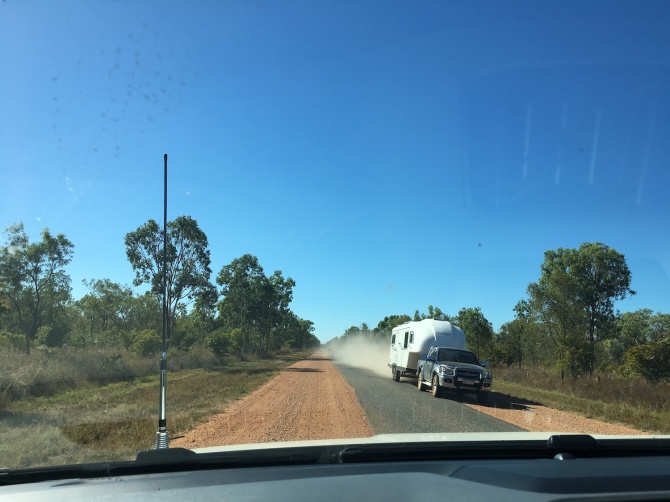 The long-distance stretches can become pretty boring with the scenery not changing much from hour to hour.  For a while though the monotony was broken by the imaginatively decorated termite mounds along the way.  The locals have a tradition of dressing up the mounds with old clothes, underwear, and a myriad of other things.  Very entertaining!

We stopped in many small towns in the Outback.  If they’re big enough, they’ll have at least one hotel which normally has a “bottle shop” attached to it and serves as the local pub.  These buildings always look great from the outside:

The inside though is normally a disappointment. Not much atmosphere, zero cosiness and always the inevitable gambling machines.  That said, we did stop at “Crocodile Dundee’s” hangout in McKinlay which had loads of ambiance, though the man himself was not around.

I’d forgotten about the water in the Outback.  It comes from the Great Artesian Basin and the facts are quite fascinating:

We’ve tasted it in various locations and it ranges from drinkable to disgusting (though the locals say it tastes fine to them). I once asked for a glass of water in a pub (what was I thinking),  and was given a murky liquid that smelled of bad eggs. The owner swore she couldn’t smell anything and had been drinking it all her life!  Needless to say, I reverted drinking beer.

At the moment we’re in Mount Garnet, heading to Cooktown and the coast tomorrow.  Here’s our route so far.

8 thoughts on “Return Down Under”